It’s okay… That’s normal. You’ll meet all kinds of characters on the road to Mr. Right. (That’s why having a simple way to steer clear of the time-wasters is so critical).

From working with over 250 private one-on-one coaching clients, I’m about to share five of the most common types of toxic men to steer clear of.

I’m separating the types here so you see each clearly. In reality, you’re going to meet men with two or more of these types blended in unique ways. Those ways can be anywhere from mildly annoying to change-your-locks dangerous.

Most men will have the milder forms, but at least you’ll be consciously aware of what’s going on, so you can make a choice about whether to stay or hit the road again.

With that in mind, let’s meet these five types of toxic men…

Miss your childhood? Don’t get enough play in your hectic life?

The stronger you answered “Yes” to those questions, the more at risk you are of falling for Peter Pan.

Why? Because, like the famous fictional character, he’s a guy who never grows up. He’s still child-like in some ways you long for.

That’s alluring, until you get an earful of obnoxious locker-room talk, the loud slang-laced chatter and the general lack of grace most adults have grown into. Especially when he’s either unaware of how you feel about it or just doesn’t care.

If you’re looking for long-term partnership with a man (what we’re all about here at Tuning in to the One), you’re going to get tired of having Mr. Peter Pan for a husband.

He’ll treat you like a nurse (somebody to physically look after him the way his mom did) or a purse (someone who’ll provide for him financially) — or maybe both.

Speaking of taking care of a man financially, Mr. Shallow Pockets is a man with deep money issues.

He may drop mentions of how expensive menu items at the restaurant seem. Or he’ll drone on about the debt he can’t pay down like that ab flab that won’t burn off.

“I know there’s a six-pack under there!”

He may even conveniently head for the bathroom when the bill arrives.

Of course, the signs may be more subtle. But, with the right tools, you’ll see how much he struggles with money.

A man with money issues usually won’t make a great partner, even if you don’t care about him being a good financial provider. His money woes are symptoms of deeper issues.

For example, he may not feel good enough in some way, so he’s not attracting the money his education would otherwise fetch him.

Financial guru, Dave Ramsey (who created Financial Peace University and has taught thousands of people about financial literacy over the last two+ decades), says the number one cause of divorce is money problems and money fights.

I don’t know if it’s really number one, but there’s no doubt money issues dig deep rifts that splinter relationships.

This guy wants to impress you.

This guy needs to impress you. BIG TIME.

To put that in perspective, most men want to impress you. All human beings are a little needy.

But when conversations are routinely 70% or more about him, you’re dealing with a guy with no room for you. He wants to point out how great he is every chance he gets.

That’s ironic, considering he needs you as the listener. He just won’t let you be the object of attention for long.

A guy like this doesn’t feel good enough on his own, so he needs external approval — especially from the woman he’s with.

This is often a Mommy issue but could be from other perceived shortcomings he’s unconsciously compensating for. (Not implying anything in particular here!)

A woman who stays with Mr. Look at Me has her own issues about needing to be needed. She feels important by giving him all the attention he asks for (or demands).

Beware! Mr. Look at Me can turn nastier the farther you go with him — especially if he’s a true narcissist, which a Psychiatric News article says is true for about 8% of men.

He wants to take charge and plan the date. That’s a turn-on for most women.

But pretty soon you find out that he wants to take control of every aspect of the conversation, critique what you’re wearing, what you’re saying and more.

He escalates into telling you what to think and what to do about almost everything.

Even when he’s not with you, he may want to keep tabs on you all the time, telling you all the while how you’re doing everything wrong. In his world, right = his way.

You can imagine how annoying this will get — even dangerous, if you let Mr. Hyper-Precision-Control run rampant.

The Centre for Children and Families in the Justice System (in Canada) says the common trait abusive men share is their need for control.

NoBullying.com cites that 35% of U.S. women in marriages experience emotional abuse, who sadly often become the 29% who are physically abused.

Don’t let that become you. Find out early who you’re dealing with.

All the guys above are wounded in some way. That’s what throws them out of balance from a man who’d make a gentle, loving partner who accepts you as you are.

Mr. Wounded, though, tells you about his wounds. Over and over. That’s how he siphons out your sympathy.

Here’s a big one…

He talks about his past failed relationships that left him broken-hearted.

While a joint study between Binghamton University and University College London with 5,706 participants from 96 countries concluded that men struggle more with breakups in the long-term than women, you’ve got to at least find a guy committed to healing.

All those “issues that require tissues” hurts are still bleeding from his body and oozing from his aura. You can just sense it.

Mr. Wounded is a guy who cries during romantic movies but only because they trigger his own pain. Worse, he resists doing the inner work required to finally heal because he’s afraid he’ll lose your nurturing attention.

So How Do You Find Out ASAP Who’s Toxic and Who’s Not?

Every guy above has taken on a specific identity because of how he sees the world.

Worse, you probably know from experience the toxic blends of men out there. A Mr. Peter Pan and Mr. Look at Me in one or a Mr. Wounded and a Mr. Shallow Pockets in one can leave you feeling sick of men for life.

So, to know who you’re dealing with upfront, you need to see how the man in front of you sees the world. FAST.

The best way to do that?

But not just any old questions in any way.

Get this wrong and you’ll trigger a man’s interrogation defenses. Once he raises the drawbridges, ye shall pass no more. Nor shall any more information pass.

You know that frustration, right?

Instead, you’re going to ask what I call Instant-Vision Questions.

A man’s answers to these types of questions give you nearly instant insight into how he sees the world — and you in it.

Will you have to ask follow-up questions?

Of course. No human being — man or woman — will tell you everything about everything in a single answer.

That’s again where Instant-Vision Questions come through. They’re naturally conversational, so a man can stay comfortable while you piece together his outlook on life.

Get the full scoop on Instant-Vision Questions and more in my free report, The Male Mind Master Key.

Then go put it to use with the men in your life today. Yes, even dads, sons, brothers and friends.

Answer: Find out how he thinks.

My FREE report, The Male Mind Master Key, shows you word-for-word how to ask Instant Vision Questions that show you how a man sees the world -- and you in it -- without tripping his interrogation alarms.

How Strong Is Your Mr. Right Attraction Signal?

Take my FREE short quiz to discover how much hidden fears are blocking the Law of Attraction from crossing your path with your Mr. Right...

"Unlock the secrets of any man's mind to know if he has soulmate potential or not.” 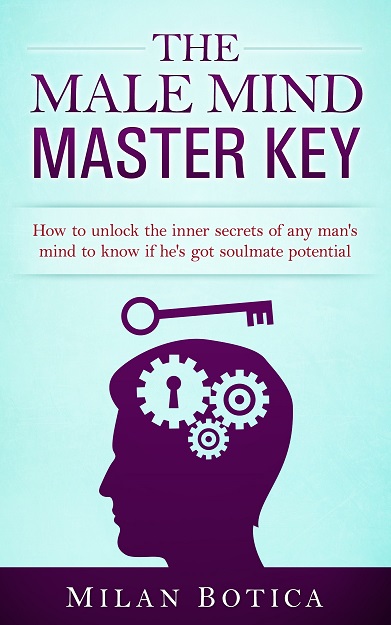 When you sign up for this free report, you'll receive instant access on the next page and in an email. You'll also receive free immediately actionable messages a few times a week to attract your dream man faster and with less stress. Unsubscribe any time with one click.